David K.A. Mordecai is Co-Managing Member of Numerati® Partners LLC, which coordinates a data analytics and technology development ecosystem, with the mission of advancing and fostering the next generation of scalable data-intensive risk and liability management enterprises.

Since 2013, David K.A. Mordecai has served as the first Scientist-in-Residence at FinTech Innovation Lab, an accelerator platform for early and growth stage technology firms, organized by The Partnership Fund for New York City in conjunction with Accenture and a consortium of venture capital firms and global financial institutions.

David Mordecai is an Adjunct Professor of Econometrics and Statistics at University of Chicago Booth School  of Business, as well as Visiting Scholar at Courant Institute, and advises research activities at RiskEcon® Lab for Decision Metrics @ Courant Institute of Mathematical Sciences NYU, established in 2011 in order to apply a range of computational and analytical methods to commercial, consumer and population-related societal trends. In this senior advisory capacity for the lab, he leads technical oversight for research activities exploring applications of agent-based computing and statistical inference, in conjunction with machine learning systems and methods, to a broad range of commercial and institutional contexts. In 2010, he was invited to become a Fellow, as well as a member of the Advisory Board of the Mathematical Finance Program at Courant, having served as a guest lecturer for the program since 2006.

David Mordecai has served as an adjunct instructor of applied mathematics at Courant, as well as an Adjunct Professor and an active member of the working group for the NYU Center for Data Science (NYUCDS) at its inception. In this capacity, he mentors students across various NYU divisions, including Courant, NYUCDS, Stern, Tisch ITP (Interactive Technology Masters Program) and NYU Tandon School of Engineering. In 2014, he was appointed Course Director to lead the NYUCDS Capstone graduate applied research program in its inaugural year.  Between 2012 and 2015, he held a joint appointment as Senior Research Scholar for Computational Economics of Commerce, Law and Geo-Politics at the NYU Stern Graduate School of Business. Dr. Mordecai also serves on the Advisory Committee of the Institute for Data Science at Durham University, England.

David Mordecai serves as Chair of the Nanotechnology Committee, Co-Chair of the Space Law Committee and Vice-Chair of the Artificial Intelligence and Robotics for the American Bar Association Science & Technology Law Section. He also serves as a technical advisor on the Uniform Law Commission Study Committee on Event Data Recorders in Cars, which is studying the need for and feasibility of uniform or model state legislation concerning automotive event data recorders and vehicle-generated data. In 2020, he was appointed as a technical advisor to the recently formed Uniform Law Commission Study Committee on Mitigation of Public Health Emergency Business Disruptions, which studies the need for and feasibility of one or more uniform state laws providing special rules and procedures to mitigate the impact of an epidemic, a pandemic or other public health emergency on the operation of businesses.

David earned a Ph.D. with concentrations in Econometrics/Mathematical Statistics and Economics/ Industrial Organization from the University of Chicago, and an M.B.A. in Finance from NYU Stern School of Business. His dissertation research applied principal components analysis to risk-based leverage estimation with a focus upon empirical tests of the limits of arbitrage, and how market shocks trigger contagion via the financing of highly leveraged financial institutions during periods of extreme market volatility. In addition to studying financial economics and market microstructure, as well as the economics of law, regulation and industry structure, his doctoral education included the study of Bayesian decision theory, social network analysis and behavioral economics.

During his thirty-year tenure in the financial services industry, David has served as a Managing Director at Swiss Re, where he led Relative-Value Market Strategies, a quantitative economics and financial engineering function with the global mandate to develop firm-wide and industry standards, benchmarks and frameworks for the valuation and trading of exposures underlying long-dated life, health, medical and pension liabilities as well as geopolitical risk. Prior to this, he served as Senior Advisor to the Head of Swiss Re Financial Services. Previously, at a multi-strategy hedge fund with $10 Billion of assets under management, he was Managing Director of Structured Products, responsible for $5 billion of CDO assets. Prior to his role as a hedge fund manager, he was Vice President of Financial Engineering/Principal Finance at AIG, and a Director at the rating agency Fitch. During the first decade of his career, he specialized in credit analysis and the origination, structuring, and trading of leveraged loans for non-recourse project finance and highly leveraged transactions involving corporations and financial institutions.

David has served as an advisor on systemic risk issues to the Federal Reserve, the International Monetary Fund (IMF), the US Treasury, and the Commodities and Futures Trading Commission (CFTC), and as an advisor on hedge fund valuation issues to the International Organization of Securities Commissions (IOSCO). He coauthored the second working paper published by the Treasury Department’s Office of Financial Research, entitled Forging Best Practices in Risk Management. He has also been a member of the Investment Advisory Committee of the New York Mercantile Exchange (NYMEX). He is the founding Co-Chair of the International Association of Financial Engineers’ (IAFE) Liquidity Risk Committee, and has actively served on the Steering Committee of the IAFE’s Investor Risk Working Group on hedge fund and CTA disclosure issues, as well as the Advisory Board.

David was the founding Editor-in-Chief of the Journal of Risk Finance (JRF ca.1999), a quarterly peer-reviewed research periodical, which addresses topics in financial risk intermediation. He remains a senior member of JRF’s Advisory Board subsequent to its sale by the original publishers Euromoney Institutional Investor to Emerald Publications. He has published numerous articles on topics including hedge fund strategies, structured credit, and weather and insurance derivatives. He has also served on the advisory committee for Chartered Alternative Investment Analysts (CAIA) Association, and on the editorial board of the Journal of Alternative Investments. In addition, he has been a guest lecturer at Columbia University, at the Graduate Business School, the Engineering/Operations Research Division, as well as the School for International and Public Affairs.

In 2016, David was elected to the Board of Governors of New York Academy of Sciences, a membership organization founded in 1817 with over 20,000 members, including research scientists at universities and industry, as well as representatives of business, government, and policy organizations, in 100 countries. He is also a member of the leadership council of Black Rock Forest Consortium, a 4,000-acre natural living laboratory for field-based scientific research and education, operated by a consortium of twenty-three colleges and universities, public and independent schools, and scientific and cultural institutions. From 2009 to 2015, he served as a member of the board of directors of Scenic Hudson, one of the nation’s three largest conservation organizations, and during his second term, co-chaired their Science Committee. In addition, he served on the board of directors of Hudson Highlands Land Trust from 2007 to 2016. 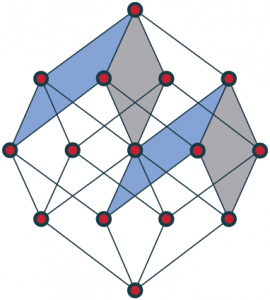